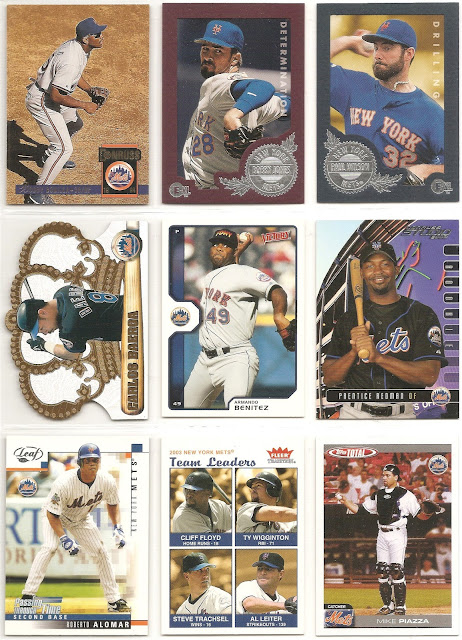 TCDb Trade #1: herkojerko (or the start of a new online home)

Now we move onto my next online home for collecting and trading.  Trading Card Database.  I recall looking into the site along with Zistle.  I found it a little confusing, especially when compared to Zistle.  I ended up here anyway, so might as well as settle in and get going.

My first trade completed on TCDb was with herko who collects Phillies and NJ born players.  He requested a bunch of Phillies from me and offered back a nice mixture of cards from the 70's, 80's, 90's, 00's, and 10's. 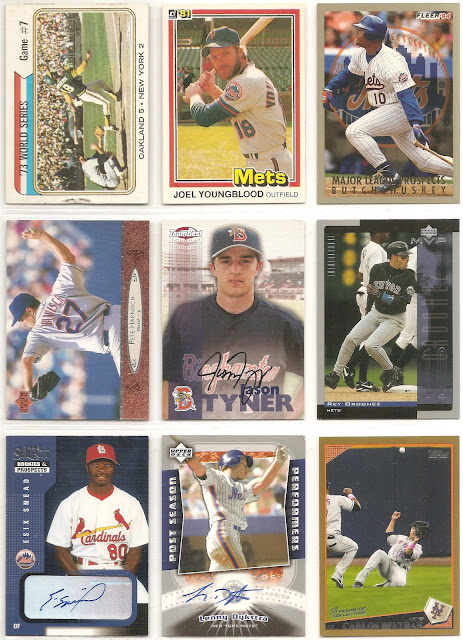 Herko sent a few auto cards in the trade.  I didn't have a Lenny Dykstra auto before, so this is very much appreciated addition.

Another first was an auto card of Esix Snead.  Esix's career didn't amount to much, but he was regarded for his speed.  He broke stolen base records during his minor league career, but only managed to steal 4 bases during his brief MLB career.

The highlight of his MLB career came on September 21, 2002.  He came in as a pinch runner in the bottom of the 8th inning as the Expos were leading the Mets 3-2.  The Mets tied the game in the bottom of the 9th on as pinch-hitter Brady Clark reached on an error that allowed Edgardo Alfonzo to score.

The game reached the bottom of the 11th with two outs.  Joe McEwing (HBP) and Roger Cedeno (walk) were on base.  Esix smacked a 3-run, game-winning homer to right field.  This was his only MLB home run and the only RBIs he would accumulate in his career.  Still more than I have, though.  Check it out below in glorious VHS quality.


Finishing up this trade with some Topps Unique.  I wonder if Topps intended for this to be a one year thing or not.  It's a perfect name for how things turned out.  The cards don't look bad either. 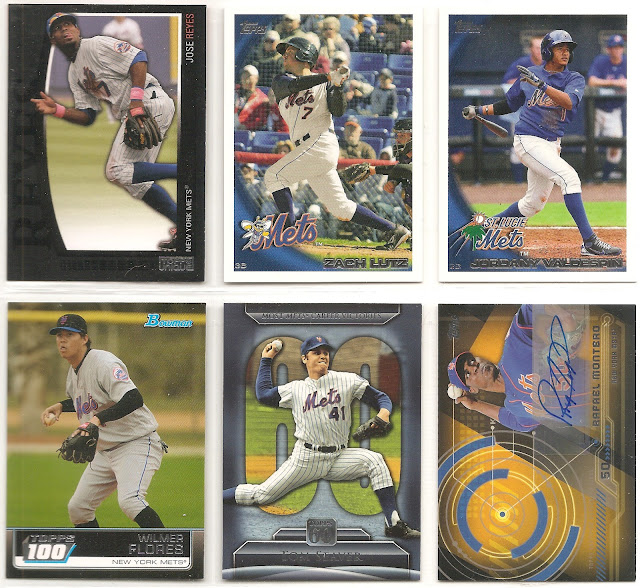 This was a nice and smooth start to my TCDb trading.  Thanks for the trade, herko!
Posted by Mets Cardboard at 1:12 PM No comments:

Well, this is the end of Zistle trading.  It actually ended last year, but being timely with posts is not my style.

Finishing up my Zistle experience is another excellent trade with Josh.  Last time he sent a bunch of extras with our trade.  Like a lot.  I intended to make a post on those because there were so many, but that idea fell with father time. 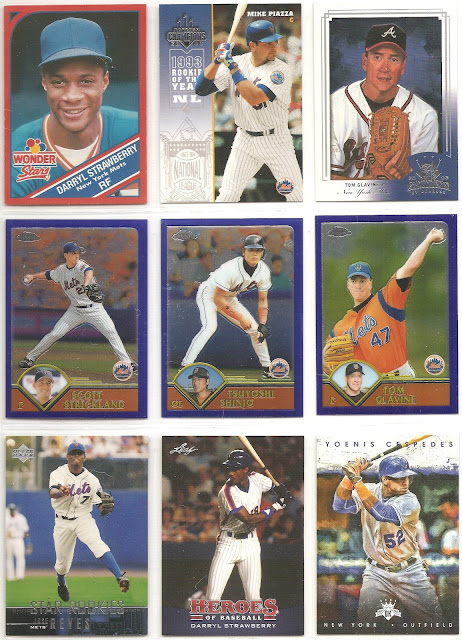 I tried to offer as many cards as he needed that I had, but Josh is just too generous.  He still sent some extras! 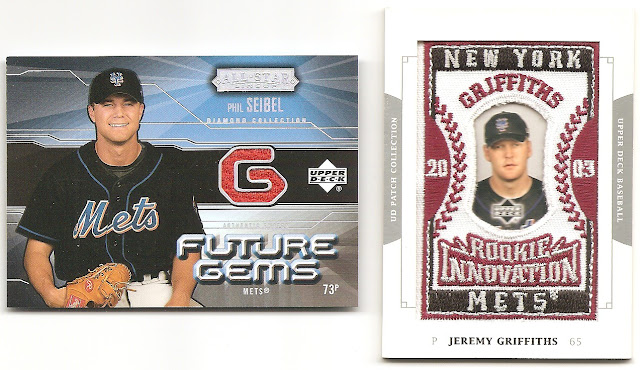 I know some relic cards have small patches of material, but the Phil Seibel relic on the left has to be the smallest I have ever seen.  This isn't a knock on Josh and his generosity.  I guess Upper Deck was just trying to use up all of the jerseys.

Phil Seibel never pitched for the Mets.  His entire MLB playing career took place between 4 days in 2004 with the Boston Red Sox.  He pitched a total of 3.2 innings and struck out one batter (Jason Giambi).  Seibel received a World Series ring for his efforts.  Baseball is weird.

Thanks for another excellent trade, Josh!  Josh also has blog home at Royals and Random.  Check it out!
Posted by Mets Cardboard at 1:14 PM 1 comment:

We are getting to the end of Zistle now.  Trades were winding down and it seemed like people were moving on.  Zistle was a great experience and really great at getting me back into this hobby.  It is a shame to see it go down like this, but it is what it is.

This next trade was with Laurie.  Our first trade was excellent and this one was no different.  Laurie is still posting over on her blog at LV's TTM autographs and Baseball Cards.  Give it a read! 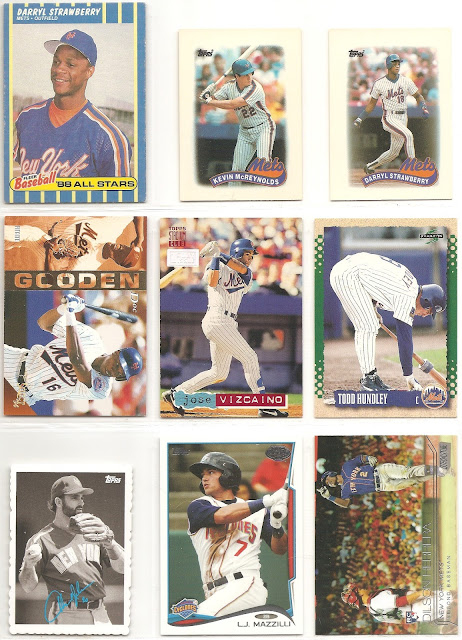 I received a nice mixture of Mets.  I really like how Topps did their mini cards in the past.  Today, they are just mini versions of the regular-sized counterpart.  Back in the 80's, the mini cards used the same or similar design with different photos and back designs.  Granted, these were not a 700+ card sets, but it made for some nice variation. 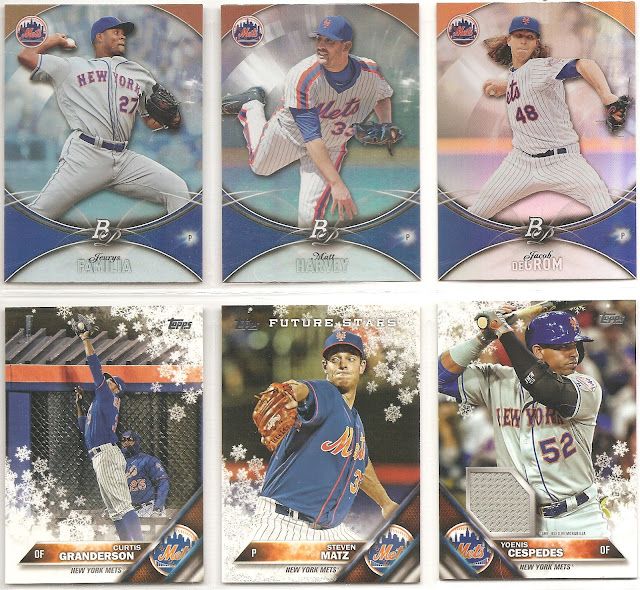 The variation we see now is pretty much what we see above.  The holiday release for 2016 Topps adds some snowflakes to the design.  I guess this was Topps way to do parallels without having borders on the cards.  The nice part about this release, though, would be how each box contained either an auto or relic card.  It had a nice price for a guaranteed hit.  I didn't partake in this release (I am an anti-Walmart shopper), but I did end up with a nice relic thanks to Laurie!
Posted by Mets Cardboard at 7:43 PM No comments:

Back to the World Series, but specifically the studio team that Fox delivered.  Kevin Burkhardt, Alex Rodriguez, David Ortiz, and Keith Hernandez.  Both Ortiz and Hernandez were new additions this postseason and the four of them seemed to gel together nicely.

Burkhardt and Hernandez worked together for eight years before Burkhardt moved over to Fox.  It was actually Burkhardt himself who called Hernandez asking him if he was interested in the position.  Alex was gushing about Keith even before their first show together.  The gushing is well deserved though.

Keith Hernandez was barely considered for the Hall of Fame when his time came, but he is very much regarded by his peers and current players.  He brought the shows his usual honesty and critiques with his off the cuff wit.  He almost got into some hot water with an off the cuff remark about San Francisco that was taken out of context.  People who brought it up seemed to not know that Keith grew up in San Francisco and was very much entrenched in the Giants-Dodgers feud.  I didn't even realize people took offense until a bit later, but I can see why that would happen and so did Keith.

Anyway, back to the cards!  This trade is another one with Paul.  I recall Paul being a NY team guy, collecting both Mets and Yankees.  This was a nice trade that filled in some missing holes in a number of sets. 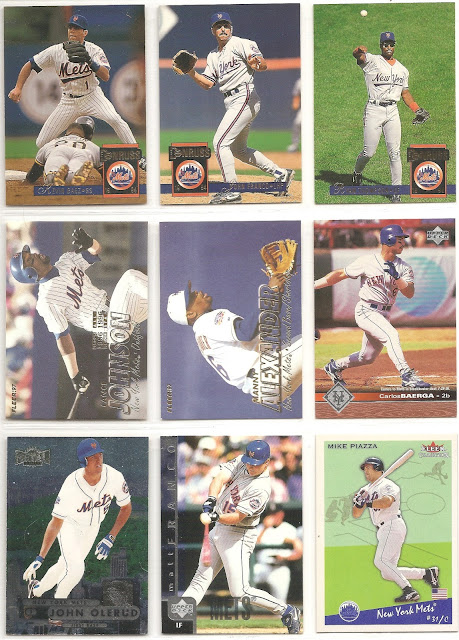 I think there are some pretty classic designs here from Donruss, Fleer, and Upper Deck.  It also looks like Fleer decided to tone down their Metal Universe set.  This time players are placed in locations with their home teams, but just look like giants.  Here we see John Olerud playing ball over Central Park.

Finishing up with new World Series champions, Carlos Beltran.  Carlos has had a great career that looks to be wrapped up now with the World Series victory.  He really has no reason to continue except for his love of the game.  I could see him doing one more year with an AL team, though.  He also seems to have enough passion for the game to be doing something (coaching or front office) after retiring.  (Edit - He announced his retirement.)

He probably also wrapped up a Hall of Fame induction with this ring.  He could become the next Met to be inducted since he played his best years in the orange and blue.  That debate is in the future, though.

Next up is a trade with Trevor.  Pretty straightforward trade with some decent stuff traded.

So, we thought Fleer learned their lesson with their 1995 design when they went the simple route for their 1996 design.  Well, it turns out that they just took their crazy and put it under the Metal Universe name.

I guess if you are into comic books, then these Metal Universe cards look cool.  They are definitely different, so that's nice.  I am not sure why Bernard Gilkey needs a falcon on his arm while he bats.  That would seem to be a bit distracting.  It makes sense that Todd Hundley needs an over sized glove since he was a catcher, but does he really need a headset mike?  Do the other players need him to tell them where the ball is going?  Was he trying to earn extra money working a drive-thru?  And what is the deal with the laser? 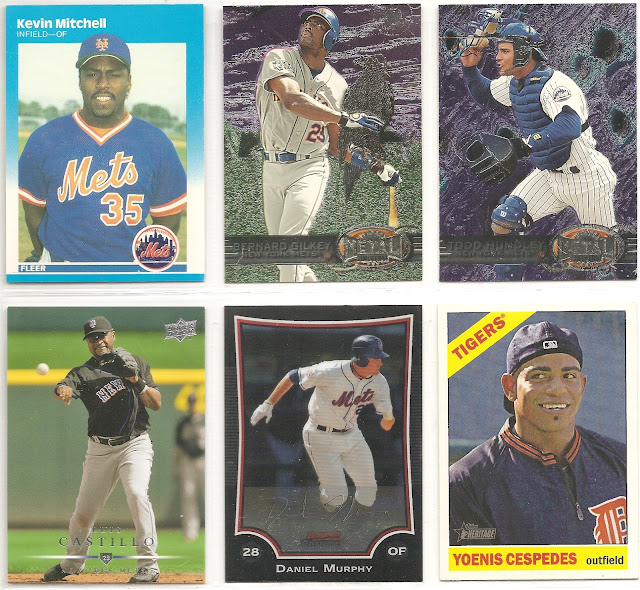 I guess the Metal Universe is not the worst thing to happen with cards.  It was creative and probably remains one of the most creative sets ever released.  Fleer was definitely doing their own PEDs designing those sets.
Posted by Mets Cardboard at 12:34 PM No comments:

Let's take a quick break and discuss the World Series.  It's been a week since the Houston Astros won their first World Series trophy in their franchise's history.  It was a pretty great World Series with some incredible games.

I had my hopes that the Astros would win it all.  I was rooting for them because I wanted Carlos Beltran to get that ring he waited 20 seasons to win.  It would have been great if the Dodgers won because of Curtis Granderson, but then there is the Chase Utley factor.  The Astros just have too many things to like about them that make rooting against them too difficult.  They also don't have Chase Utley.

Now, back to the cards!  This time with another new trade partner in Paul.  Pretty simple trade overall, if I recall correctly.

Also features new World Series champion Collin McHugh.  Collin never caught on with the Mets and was traded to the Rockies for Eric Young, Jr. in 2013.  He was claimed off of waivers by the Astros where started to shine.  In the Mets defense, they were rich in pitchers and could afford to lose a potential breakout to fill a hole in their bench. 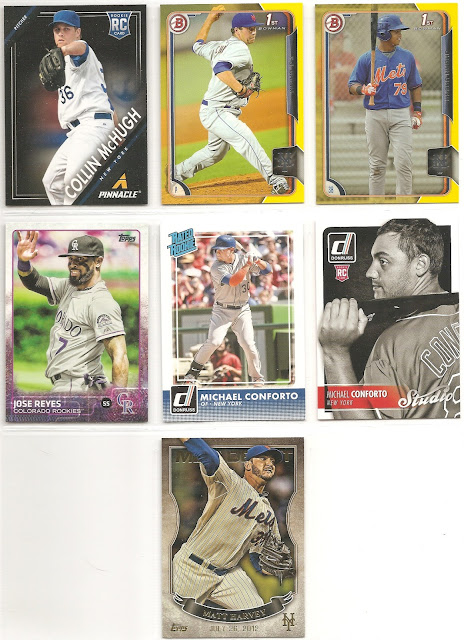 This Jose Reyes Rockies card wasn't at Citi Field either.  This looks like it was from Wrigley Field which I believe is where he made his Rockies debut after being traded for Troy Tulowitzki.  So far, my thought about former Mets cards showing them playing the Mets seems to be falling flat.

Posted by Mets Cardboard at 11:11 AM No comments: